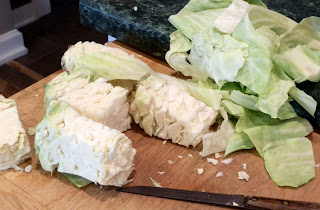 Good Morning.  Now that I have the cabbage all cleaned off the counters, table and floor, I will show you what I have been doing this morning.
Making Sauerkraut
I have done this once before and for a year the jars sat on a shelf in the basement.  I was afraid to eat them.  My friendly neighbor heard my story, asked how I made it and told me to eat it as sauerkraut was almost impossible to spoil.  I believed her and lived to tell the story.  :)  So here is the start of another batch. 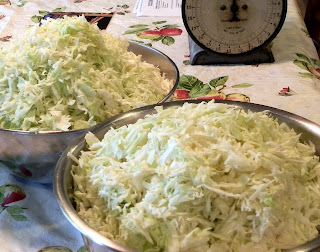 I start by cutting off the cabbage and slicing it in my food processor.  Easy, but messy.  I LOVE chewing on the cores.  They are so yummy and good for you too.  All you see here is going in the compost pile though.  And that's another story.  I made one when we moved here and my guy didn't like where it was so he tore it out.  Sigh.  Today he said he's making me one.  I think he got tired of all the "stuff" I kept putting in his Worm Bed, as he informed me this morning that it was a worm bed, not a garbage dump.  Fancy that. 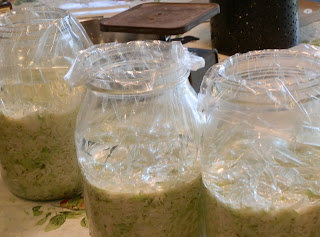 Next picture is after I had the cabbage shredded and weighed.  I am trying to follow a couple recipes.  I really think I should stick to one at a time, but the easiest one that I really wanted to use, was a bit scary for me.  I needed more than "it spits and sputters for six weeks and then seals itself".  I think I would again be afraid to eat it.  So I asked my friendly neighbor up the road some more questions.

She told me that I could put a bag of water on top of the cabbage, tucked in all good and no air would get in and there would be no scum.  Woopie!  I have wasted a lot of cabbage after looking at that scum, so I'm hoping for the best here.  I don't have a crock without a crack, so I have this in three gallon jars and right now it's hiding in the basement stairwall in the dark.  My cousin told me that if you leave it in the light, it turns a yucky yellow color.  Hmm.  So that's what happened last time.

So next on my list is pizza sauce.  I found a recipe to can some on cooks.com and am working on it today.  I need to get down and get it on the stove and put the spices in.  Wish me luck.
Posted by Carole at 11:19 AM

Carole
I am a daughter, wife, mom, gramma, and friend. I live with my lover, best friend and husband of 38 years. (That's just one person) Rufus, our adorable labradoodle lives with us.